Federal Employee of the Year

The “Federal Employee of the Year” Awards Program was established to honor the men and women in the federal government who have consistently performed their duties in an outstanding manner. Its purpose also is to encourage high standards of performance in the South Florida Federal Community.

This year, JoAnn Goodrich was honored as the “Federal Employee of the Year” in the Administrative category. Finalists in the Service to the Community category were Marie Lochard-Lubin and Tatyana Kats.

Technical/Information
Jose Puig
Posted by Flipper at 3:15 PM No comments:

Pompano Beach Letter Carrier Grace Perry had a letter addressed to a person that she has never seen before. The customer met her at the mailbox and requested this one piece of mail for "her uncle." Perry could tell that it was a credit card, but since the person's name was not on the mailbox, she brought it back to the Post Office. Plus the customer said she could not bring her uncle and his ID to the mailbox.

Back at the Post Office, Perry contacted the Postal Inspection Service was notified. Inspector Alvarez investigated and learned that the person on the address was an elderly man in New Jersey. Turns out that the elderly man had been robbed and his identity stolen. He notified his financial institution that his bank account information, along with his credit cards, had been stolen. The inspector followed up with the information and now there are two people in custody for identity thief.

Perry's alertness saved this man from the possibility an additional $10,000.00 of credit card fraud.
Posted by Flipper at 2:36 PM No comments:

Climbing the Corporate Ladder Thru ELD

If you’re in an EAS position level 18 and above, you’ll want to submit an application for the EAS Leadership Development Program between June 1 and June 18.

The EAS Leadership Development (ELD) Program is the Postal Service’s structured approach to identifying and developing future leaders for key managerial positions in each district. ELD participants will have the opportunity to develop their leadership competencies, along with their functional/technical skills, to prepare them for future career advancement.

EAS level 18 and above District and Area employees interested in leadership development, visibility, and future career growth should apply. ELD is not open to Headquarters or Headquarters-related employees at this time. Current ELD participants must re-apply during this Open Season.

For additional information, please contact Damaris Agrait, Manager, Learning Development and Diversity, at 305-470-0881.
Posted by Flipper at 1:34 PM No comments:

It's Hurricane Season! Who You Gonna Call? 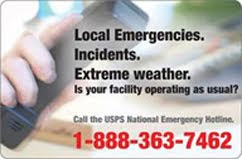 There are many types of emergencies. But there’s only one source of information on work schedule and reporting time changes, facility openings and closings, and other workplace announcements due to an emergency situation. To check your work schedule and/or status of your facility in an emergency situation (including before, during, and after a tropical storm or a hurricane), call the USPS National Employee Emergency Hot Line at 888-363-7462.

ONLY in case of a natural disaster requiring you to leave your home, city, or state … report your location, physical condition, and contact information to the USPS Emergency Notification Line at 866-666-5349. Please DO NOT call this number for information on your work schedule/facility status.

Posted by Flipper at 1:31 PM No comments: 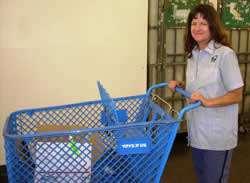 Stockton, CA, Letter Carrier Technician Carol Ortega said she still had about two hours of mail to deliver when she called one day to report her LLV wouldn’t start.

The VMF couldn’t send a tow truck. And a towing vendor couldn’t say when he would be able to tow the LLV back to the Post Office.

Later that day, the tow truck arrived at the Post Office with Ortega in the front seat and the ailing LLV behind. Manager Harry Centeno asked Ortega how much mail she had brought with her, expecting her to reply that there were still two hours of delivery remaining.

Instead, Ortega told Centeno she found an old shopping cart stuck in the bushes and used it to deliver the remainder of her route. She had finished by the time the tow truck arrived.

“Ortega went above and beyond the call of duty, exemplifying extraordinary customer service,” said Centeno. “Her passion made the difference.”
Posted by Flipper at 1:21 PM No comments:

It's School Bells (and an Award) for Bob Balzan 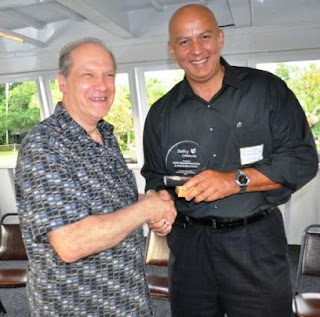 Miami P&DC Manager, Maintenance Operations Robert Balzan (L) received an award from DeVry University at a recent awards dinner. Bob and Rick Amezquita, Manager, Maintenance at the Miami P&DC (R) have been active with DeVry's recruitment and job fairs. Bob also services on the school's advisory board.
Posted by Flipper at 1:03 PM No comments: 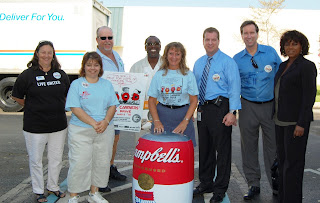 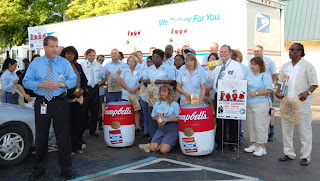 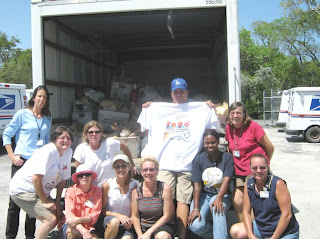 The annual National Association of Letter Carriers (NALC) Stamp Out Hunger Food Drive, held May 8 in partnership with the Postal Service, collected a record 77.1 million pounds of non-perishable food. The results of the event easily eclipsed the previous record of 73.4 million pounds in 2009.

South Florida city and rural letter carriers collected nearly two million pounds of canned goods this year!
Stamp Out Hunger — the nation’s largest one-day food drive — annually collects non-perishable food to help more than 35 million people, including 12 million children, who face hunger every day in America. Despite a continued downturn in the economy, Americans boosted their donations, increasing the 18-year total to more than 1 billion pounds.
Posted by Flipper at 12:21 PM No comments:

You could be the match.

From 8:00 am to 2:30 pm on Thursday, June 10, the South Florida District will have a kickoff for the Delivering the Gift of Life Campaign, USPS Marrow Donor Program, at the Okeechobee Post Office at 1000 State Road 70 East in Okeechobee. This is the first of several events to be scheduled in the district.

The USPS has played a leading role since 1997 in helping recruit potential donors to the Marrow Donor Program through its Delivering the Gift of Life Campaign.

In 2009, the USPS was the recipient of the first “Rod Carew Award for Leadership” for having saved more lives through marrow donation, more than any other business organization in the nation. The patients that we have helped have leukemia, lymphoma, sickle-cell and other life-threatening diseases that can be treated by a marrow or cord blood transplant.
Posted by Flipper at 12:19 PM No comments: