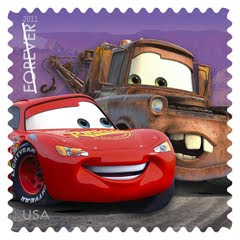 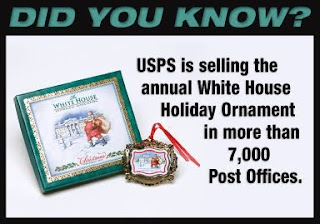 Posted by Flipper at 6:10 PM No comments: 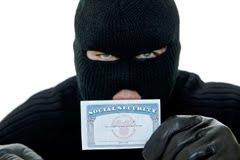 Recipients must show government-issued photo identification that includes a date of birth. This verification must be made in person and never will be requested by phone. Adult Signature Required mailpieces cannot be left at an address without first obtaining the signature of an adult who is 21 years of age or older.

The Postal Inspection Service says safeguarding personal information is crucial to financial well-being. Employees and customers never should provide Social Security numbers or birth dates over the phone if they didn’t initiate contact.
Posted by Flipper at 6:06 PM No comments:

November is Native American Heritage Month, a time to celebrate the historical and cultural contributions of Native Americans. More than 4,500 USPS employees trace their origins to either American Indian or Alaskan Native roots.
Native American culture has been reflected on U.S. postage since 1898 with the issuance of a 4-cent stamp known as “Indian Hunting Buffalo.” Since then, nearly 60 stamps have portrayed Native American themes.
Click here for a look at more Native American-themed stamps in a National Postal Museum online exhibit.
Posted by Flipper at 6:02 PM No comments:

The Benefits of Technology in Bad Weather

Consider the benefits of technology in a weather event. Here are some helpful tips for iPad, iPhone, iPod Touch, BlackBerry and Smart Phones users:

·Download flashlight APPs on smart phones. When Japan experienced the tsunami, flashlight apps were the #1 download at that time. This feature will come in handy during a power outage.

·From the ABC newsroom, Hurricane HD lets you track storms with moving radar and satellite imagery from the National Hurricane Center. It provides tropical bulletins, forecasts, and advisories. You can watch video updates for current storms and find data on major storms of the past.

·The Weather Channel has fully customizable weather maps, animated radar maps, detailed weather conditions and forecasts, severe weather alerts, and a notification bar with the current temperature and severe weather alert indicator. It allows you to get weather forecasts for your location or search by city, ZIP Code, street address, or landmark. The app also includes interactive maps that are fully customizable and feature the functionality of Google Maps. You can decide to display layers such as radar, clouds, UV index, rainfall and more.

·Global Alert Network delivers hands-free national traffic and weather alerts. See iTunes for Apple devices or go to BlackBerry for a download. The Global Alert Network is a location-aware network platform that automatically broadcasts audible hands-free alerts to mobile devices. You can choose to subscribe to weather or traffic alerts, which are geo-targeted to your location.

One last reminder: Make sure to have your electronic device fully charged before the hurricane.
Posted by Flipper at 6:00 PM No comments: 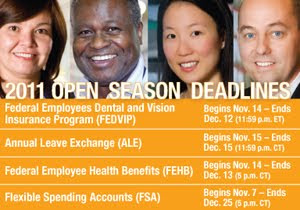 It’s getting to look a lot like open season. In the next several weeks, employees will have opportunities to sign up, make changes to their employee benefits — or consider a new program.
Open Season for the Flexible Spending Accounts (FSA) program begins Monday, November 7, while Federal Employees Health Benefits (FEHB) and the Federal Employees Dental and Vision Insurance Program (FEDVIP) begin Monday, November 14.
Employees should note that the 2010 Affordable Care Act changed FEHB eligibility requirements allowing children up to age 26 as eligible dependents for Self and Family coverage. Employees also should check their insurance coverage for details that could save them money.
Employees can make FEHB and FSA selections on PostalEASE. For FEDVIP elections, go to http://www.benefeds.com/ or call 877-888-FEDS (877-888-3337) or TTY 877-889-5680.
Open Season for the Annual Leave Exchange (ALE) begins Tuesday, November 15. Employees eligible to make an ALE election will receive a letter.
FEHB, FSA and FEDVIP booklets also will be arriving in the mail. Look for the information and save it when it arrives or go to the “My HR” section on LiteBlue for more details.
Employees will need their employee identification numbers (EIN) and USPS personal identification numbers (PIN) to enter PostalEASE or LiteBlue.
Enrollment changes and new enrollments made during the 2011 FEHB Open Season will become effective January 14, 2012 (Pay Period 03-12). New premium payments will be reflected in paychecks dated February 3, 2012.

New enrollments made during the 2011 FEDVIP and Flexible Spending Accounts Open Season will be effective January 1, 2012.
Posted by Flipper at 5:54 PM No comments:

With the deep decline in mail volume due to current economic conditions and continuing electronic diversion, the Postal Service has an excess of employees and equipment in some mail processing operations. A study was begun on September 15, 2011 at the South Florida Processing and Distribution Center to determine the feasibility of consolidating redundant operations to see if any efficiencies and cost savings would be achieved.

While no final decision has been reached, Postal Service managers will give an overview of the reasons for the proposal and its possible outcomes, and will listen to community input and concerns. A summary of the proposal and presentation materials will be made available on usps.com one week before the meeting date.

Anyone who wishes to submit comments in writing can send them to Manager, Consumer and Industry Contact, South Florida District, 2200 NW 72 Ave, Rm 225, Miami FL 33152-9631. Public comments will be accepted through December 2, 2011.
Posted by Flipper at 5:53 PM No comments: