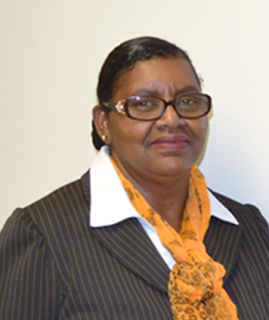 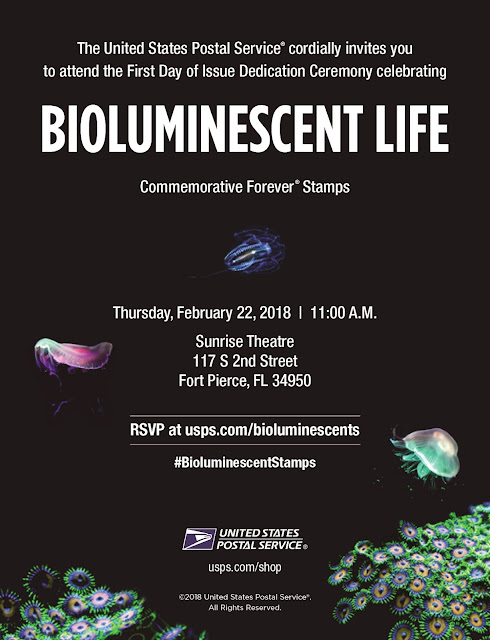 Employees may participate as an off-the-clock activity.
Posted by Flipper at 12:30 AM No comments: 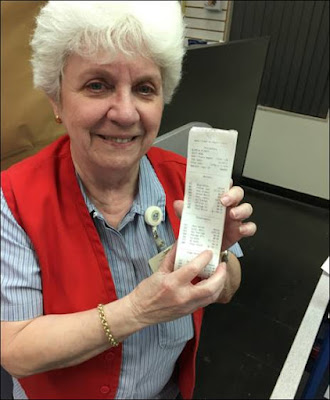 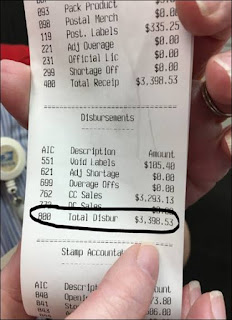 Olympia Heights Branch Sales and Services Associate Maria Garcia proudly demonstrates the results of her promoting the Mobile Point of Sale (mPos) during the holidays.

On Dec. 18, 2017 Garcia assisted the branch with Wait Time In Line reduction by approaching all Miami customers at the lobby entrance. Garcia assessed their mailing or shipping needs, and if she were able to complete transactions on the mPOS device, she did so successfully for a total of $3,398.53 in one day. 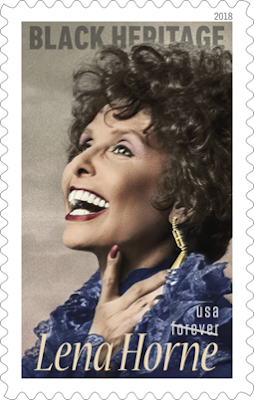 Lena Horne was a trailblazer in Hollywood for women of color and used her fame as an entertainer to become an important civil rights spokesperson.

The stamp art features a photograph of Lena Horne taken by Christian Steiner in the 1980s. Kristen Monthei colorized the original black-and-white photo, adding a background reminiscent of Horne’s Stormy Weather album, with a few clouds to add texture and subtly make the album reference. “Lena Horne” is written along the bottom of the stamp, with “Black Heritage,” the stamp series title, at the top. “USA” and “Forever” appear on the lower right-hand side above Horne’s name. Art director Ethel Kessler designed the stamp.
Posted by Flipper at 12:30 AM No comments: 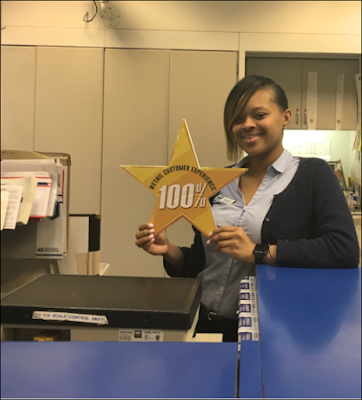 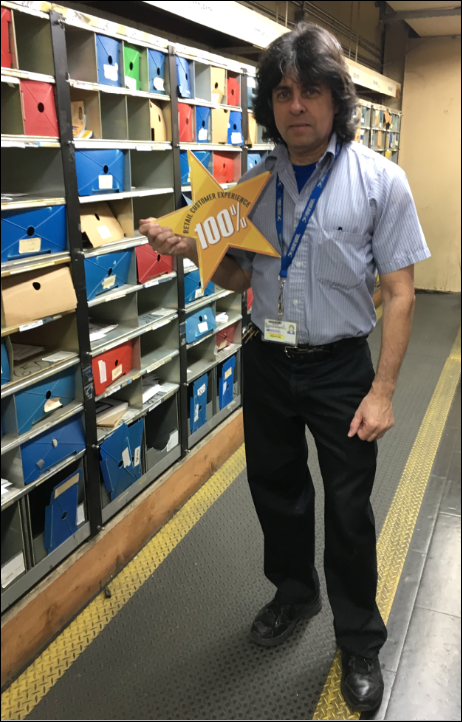 FEOY Nominations Are Due Feb. 6

The South Florida Federal Executive Board is proud to announce the Annual “Federal Employee of the Year” Awards Program/Luncheon. As every year, outstanding federal employees, including postal employees, in Broward, Miami-Dade, Monroe, and Palm Beach Counties will be recognized. The awards program will be on Friday, May 11 during National Public Service Week.

The recognition process begins with you! This is your opportunity to honor outstanding federal employees at all levels within your agency or installation for their meritorious work and overall contributions to the South Florida community. Do you have an employee or know of an employee who consistently performs above and beyond the call of duty?  A member of the South Florida Postal Family who deserves recognition for his or her heroic efforts demonstrated in a life-threatening situation? An employee who generously volunteers his or her time to benefit others?

Nominations must be based on demonstrated performance between Oct. 1, 2016 and Sept. 30, 2017. Ask your supervisor for a copy of the nomination package with category definitions and general information/examples. Submit your completed nomination package to Manager, Learning Development and Diversity Damaris Agrait on or before Tuesday, February 6. 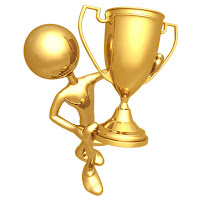 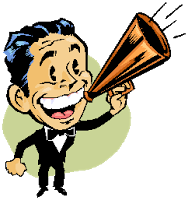 Are you looking to broaden your horizons? There’s an ad-hoc Network Specialist, EAS-17, position available at the Miami International Service Center in Miami, FL.

All qualified career employees within local commuting distance (50 miles) of the Miami ISC, 11698 NW 25 Street, Miami, FL, may apply for this ad-hoc position. Work hours will be 1000 – 1830 with Saturday/Friday as non-scheduled days. 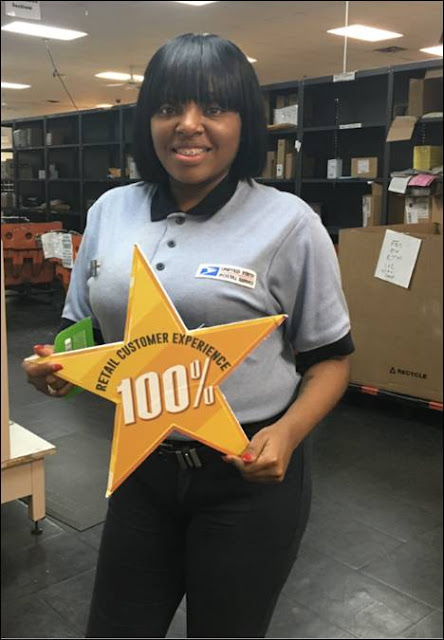 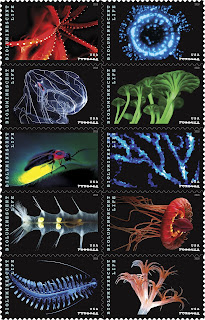 The South Florida District is hosting the First-Day-Of-Issue dedication of the Bioluminescent Life Forever stamps at 11 a.m. on Thursday, February 22, at the Sunrise Theatre, 117 South 2nd ST, Fort Pierce, FL. The event is free and open to the public. Employees may attend as an off-the-clock activity.

Bioluminescence reigns supreme in the darkness of the deep ocean. Fishes, squids, jellyfish, worms and many other ocean organisms make varied use of their ability to glow. Their light can lure food or attract a mate or fend off a predator. For many species, bioluminescence is security lighting. For example, a midwater jellyfish sets off flashing, swirling rings of light when it is threatened. The display alerts other predators more likely to eat the attacker than the jellyfish itself.


Some species are born with bioluminescence, while others, such as certain fishes and squids, have receptacles for displaying bioluminescent bacteria that they capture.

Since the late 19th century, many breakthrough discoveries regarding bioluminescence have come through the study of fireflies. Because these beetles exist on every continent except Antarctica, they provide scientists with the most convenient means by which to investigate the phenomenon.
Posted by Flipper at 12:30 AM No comments:

Hosting the US Flag Stamp Dedication 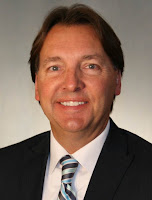 Acting District Manager Timothy R. Costello (pictured left) will be the dedicating official at the First-Day-Of-Issue  dedication of the U.S. Flag Forever stamp at 11 a.m. on Friday, February 9. The public, including our employees, are invited to attend this free event scheduled during the American Stamp Dealers Association Winter Postage Stamp Show at the War Memorial Auditorium at 800 NE 8 ST in Fort Lauderdale. Employee attendance will be an off-the-clock activity. 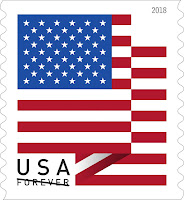 For more than half a century, U.S. stamps have depicted the American flag in vivid red, white and blue. This eye-catching new issuance continues that tradition with a striking graphic design of a flag with two crisp folds.

Although the American flag had appeared on U.S. stamps as far back as 1869, usually as a small element in a larger vignette, it was only in 1957 that the U.S. Post Office Department developed a quick and economical way to produce bicolor or multicolor stamps that could depict the flag in its true red, white, and blue, thanks to a special press acquired from Switzerland by the Bureau of Engraving and Printing.

In the decades since, multicolored flags have become a consistent motif on U.S. postage. Whether paired with famous landmarks, shown against inspiring vistas, placed in their historical context, or used as a graphic element in a larger design, the flags on U.S. stamps connect us to our nation’s history and serve as icons of patriotism for generations to come.
Posted by Flipper at 12:30 AM No comments: 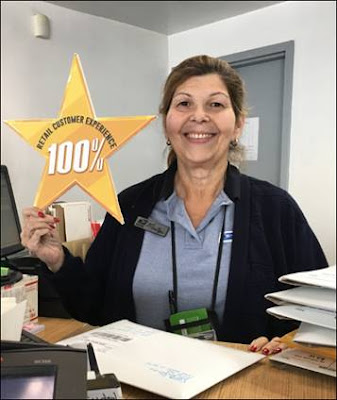 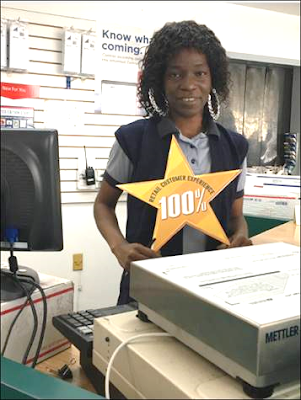 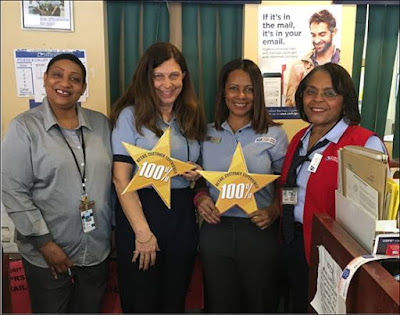 Priority Mail is a fast domestic service that includes flat-rate shipping in one, two or three business days based on where your package starts and where it’s being sent. Priority Mail Express is the fastest domestic service, with limited exceptions, available 365 days a year, with a money-back guarantee and delivery shipping to most U.S. addresses, including PO Boxes. 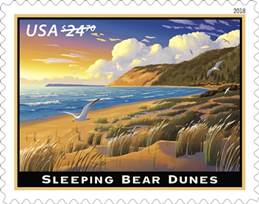 The Priority Mail Express stamp highlights the Sleeping Bear Dunes, which name is from a Native American legend. Rising 450 feet above Lake Michigan, the dunes are the highest perched dunes in the Great Lakes region and are protected within Sleeping Bear Dunes National Lakeshore. The stamp art celebrates the grandeur and serene natural beauty of the dunes and surrounding park. Dune grasses mark the beach in the foreground, as gulls dive and soar in the breeze. Art director Greg Breeding of Charlottesville, VA, designed the stamp with original art by Dan Cosgrove of Chicago. 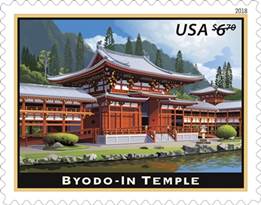 The Priority Mail stamp features a colorful illustration of the Byodo-In Temple, a popular tourist attraction in Hawaii. A smaller-scale concrete replica of a wooden Buddhist temple in Japan, the Byodo-In Temple is located in a private cemetery on the island of O’ahu. Built in 1968 to commemorate the centennial of the first Japanese immigration to Hawaii, the temple is available for use for ceremonies, services, and events such as classes and concerts. Greg Breeding also designed this stamp with original art by Dan Cosgrove.
Posted by Flipper at 12:30 AM No comments:

Your kind remarks will be brought to the attention of the local postal officials who will notify the appropriate managers.

We are pleased that Annie Burgains has been of service to you.

Their performance enhances the image of the Postal Service and speaks well of the efforts we make every day to provide the finest service possible.

Again, thank you for writing. 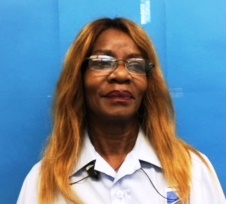 I can't allow another year to end without acknowledging my letter carrier, Annie Burgains.

Annie is an extraordinary individual. She always makes me smile and feel better when I see her. I am not alone in this observation. She has an inward joy that is infectious and spreads to all that she meets.

She has been my carrier here for the past 13 years and with that she completes her appointed rounds, in heat and storm without complaints or unhappiness. Her efficiency in her job and accuracy are to be commended.

I have told Annie that she is never permitted to retire, although in a few short years she will have earned that privilege and no one should deprive her of what she has truly earned.

I want to bring her work and esprit to your attention; she is a most valuable employee associate and an apt ambassador for the Postal Service.

I am, most sincerely yours,
Roy Gorin 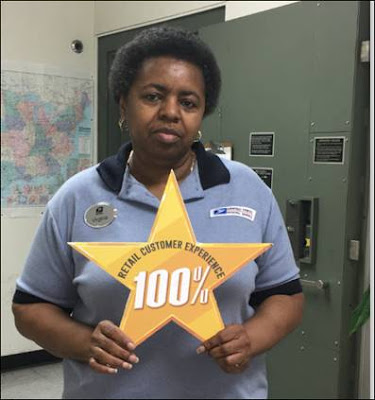 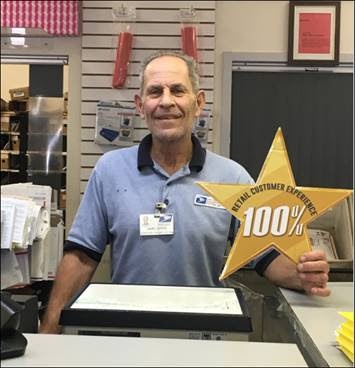 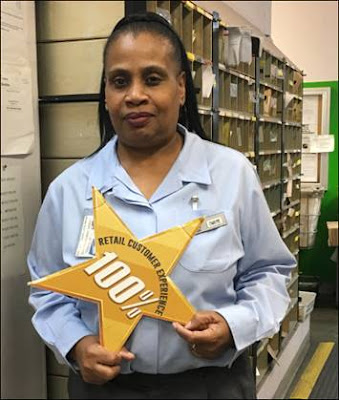 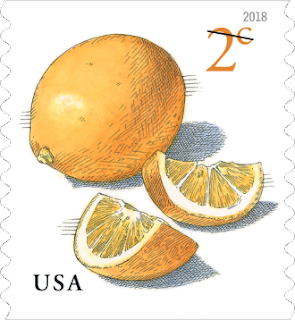 The Postal Service will dedicate the 2-cent Meyer Lemons definitive stamp today at a First-Day-of-Issue ceremony during the 2018 Winter Stamp Fest and Postcard Show in Kenner, LA.

The Meyer Lemon is a citrus fruit thought to be a cross between a true lemon and either a mandarin or common orange. The stamp design is new to the ongoing Fruit definitive series, which began almost exactly two years ago when the 10¢ Red Pears stamp was issued in a coil of 10,000. Other stamps depicting apples, grapes and strawberries, in various coils or in panes of 20, have been issued in this series.

For more than a century, the Meyer lemon was known mostly for its looks. In its native China, it was primarily a decorative houseplant. The Meyer lemon might still be decorating homes today if it weren't for one man. In the early 1900s, the U.S. Department of Agriculture sent Frank N. Meyer, an agricultural explorer, on several trips to Asia with the mission of collecting new plant species. Among more than 2,500 plants that he introduced to the U.S., the Meyer lemon was named in his honor. Sadly, Meyer would never live to see the success of his namesake. He died on an expedition near Shanghai in 1918.
Posted by Flipper at 12:30 AM No comments: 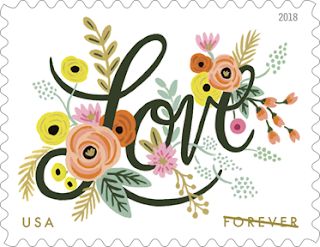 Today the Postal Service dedicates the Love Flourishes stamp at the Phoenix Convention Center in Phoenix, AZ.
The stamp art features a fanciful garden of colorful flowers surrounding the word “Love” written in cursive script. Hand-painted with opaque watercolors on papery by artist Anna Bond, the original art is whimsical and vibrant, at once retro and timeless. The flower garden includes stylized roses, peonies, and dahlias in pink, coral, and yellow, with pale blue-green berries and gold fronds and leaves. The word “Forever” appears in the lower right-hand corner of the stamp, and “USA” is on the lower left. Art director Greg Breeding designed the stamp using Bond’s original art.
Posted by Flipper at 12:30 AM No comments: 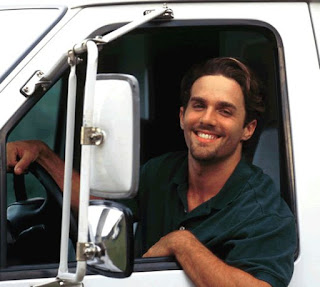 Do you know someone with excellent driving skills and who needs a job?

The Postal Service is seeking PSE Tractor Trailer Operators in Miami and Opa-locka, FL. Starting salary is $20 per hour. Employment for one year only. Apply online at www.usps.com/employment through January 21.
Posted by Flipper at 12:30 AM No comments: 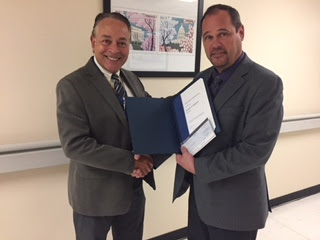 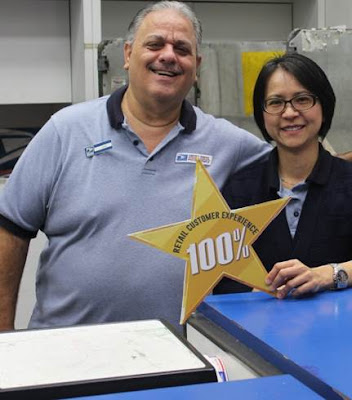 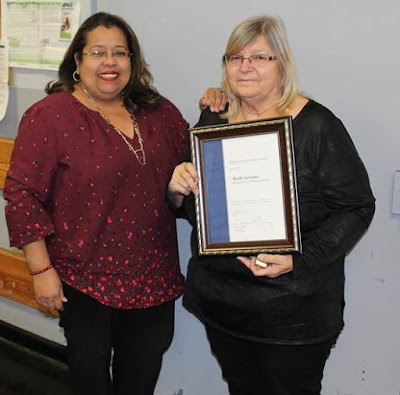 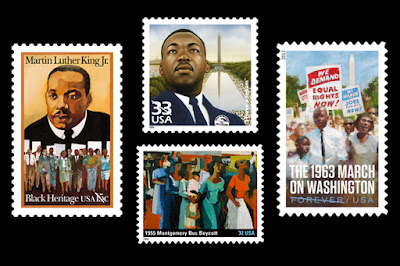 1. Black Heritage: Martin Luther King Jr. In 1979, a 15-cent stamp — the second in the Black Heritage series — was issued to honor King.

2. I Have a Dream. King’s famous 1963 speech, which called for economic and civil rights and an end to racism, was the subject of a 33-cent Celebrate the Century stamp in 1999.

3. To Form a More Perfect Union. In 2005, the great orator’s quote and portrait were featured on a pane of 10 37-cent stamps that recognized those who fought for civil rights. King was associated with most of the events illustrated, including the Greensboro lunch counter sit-in, the Montgomery bus boycott and the Selma to Montgomery march.