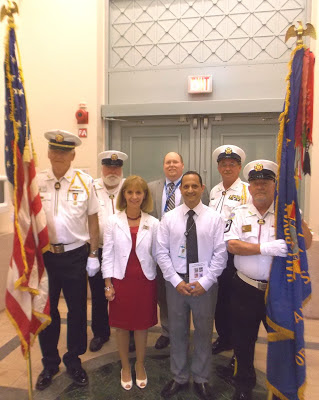 From the heights of sunny summer to the snowy depths of winter, The American Flag never looked more beautiful than on the US Postal Service’s A Flag for All Seasons Forever Stamps. The set of four stamps were celebrated on Flag Day in a dedication ceremony held at the VA Medical Center in .

Devotion to the American Flag was evident as one traveled the driveway that led to the ’s chapel. Flags waved freely as they adorned each side of the driveway. Inside the chapel, veterans, public officials, and staff members gathered to participate in the ceremony.

After the Presentation of Colors by VFW Post # 10132, Kyle Croce, VA Staff, opened the ceremony with a Pledge of Allegiance. Croce had just returned from his tour of duty 3 days prior. George Hunter, VA Staff, then led the audience in song with “God Bless ”

“The American Flag is the fabric of our nation,”said Andrew Moir, Manager, Customer Service, Palms West Station.  “How similar the seasons of the stamp are to the seasons of the very people in this room today – whose struggles are also testament to their longevity and their histories of how many seasons they have passed through to acquire with pride the knowledge of what the American flag symbolizes to our nation.”

West Palm Beach Postmaster Rich Fermo then presented the set of four stamps to VA Medical Center Director Charleen R. Szabo.  She accepted the stamp presentation and proudly spoke of her father’s appointment by Harry S Truman, to a Postmaster position in .  Szabo presented the Postmaster in return with a coin. Representatives from Congressional offices in attendance were: Melissa Durity, US House of Representatives Lois J. Frankel; Dan Liftman,  Congressman Alcee L. Hastings;  and Team Murphy from US Congressman Patrick E. Murphy’s office.

Each of the four A Flag for All Seasons Forever stamps shows an American flag, viewed from below, flying from a pole against a background of trees that evoke one of the four seasons of the year. The stamps were originally issued on May 3, 2013.
Posted by Flipper at 2:52 PM