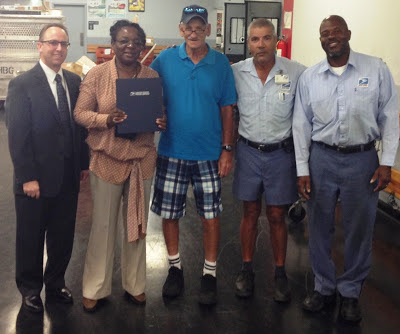 Rhodes is credited with recognizing the early warning signs of a stroke and reacting quickly to save the life of Letter Carrier Joseph Ondrizek. He said that he felt fine, but the determined Rhodes called 911 anyway. Paramedics arrived, conducted an examination, and then transported Ondrizek to the hospital. While walking to the nurses’ station, “the floor was moving under my feet, I lost my balance, and fell backwards to the floor,” recalls Ondrizek. He suffered paralysis on his left side, spent five days in the hospital and two weeks in an inpatient rehabilitation center. He now receives therapy as an outpatient.

A retired Ondrizek returned to Melrose Vista Station to be reunited with his manager and co-workers for the presentation. The District Manager emphasized the importance of “people first” vs. “ink and paper.” The Postmaster read excerpts of Ondrizek’s letter of appreciation praising his manager to the District Manager. The letter noted how much Ondrizek enjoyed being a letter carrier and the camaraderie with co-workers.

“I will be forever grateful for Virginia’s actions, and appreciate a manager of her caliber and character overseeing postal operations,” said Ondrizek.
Posted by Flipper at 4:29 PM