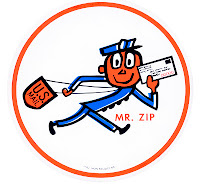 The Postal Service adopted the popular cartoon figure as the trademark for the Zoning Improvement Plan or ZIP Code, which began on July 1, 1963. Immediately following the implementation of the ZIP Code system, Mr. ZIP began appearing in various forms around big cities and small towns. His likeness soon was displayed everywhere, from local Post Offices to the sides of mail delivery vehicles. It was these images of Mr. ZIP that first made him into a household name and called early attention to the ZIP Code system.
Mr. ZIP was not always postal. 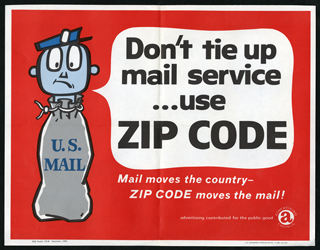 Harold Wilcox, son of a letter carrier and a member of the Cunningham and Walsh advertising agency, created Mr. ZIP for use in a bank-by-mail campaign by Chase Manhattan Bank. Wilcox's design was a childlike sketch of a postman delivering a letter. The figure was used only a few times, then filed away.
The American Telephone and Telegraph Company acquired the design from the Cunningham and Walsh agency and made it available to the Post Office Department without cost. Post Office Department artists retained the face but sharpened the limbs and torso and added a mail bag.
In October 1962, the new Mr. ZIP was unveiled by the Post Office Department at a convention of Postmasters. Mr. ZIP, who has no first name, appeared in many public service announcements and advertisements urging postal customers to use the five-digit ZIP Code.
With the introduction of the nine-digit ZIP Code, or ZIP+4, in 1983, Mr. ZIP went into partial retirement. Today Mr. ZIP still is used occasionally by the Postal Service.
If you like nostalgia, learn more about the exciting life of Mr. ZIP at the Smithsonian’s National Postal Museum at http://www.postalmuseum.si.edu/zipcodecampaign/p4.html.
Posted by Flipper at 3:40 PM