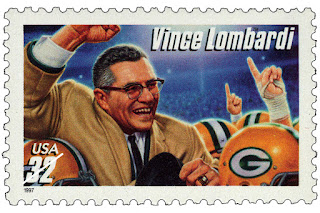 Today is Superbowl Sunday.
In 1997, the Postal Service issued a stamp honoring famed coach Vince Lombardi.
The gridiron doesn’t belong to just football fans.
It’s also part of the history of the Postal Service, which has issued several stamps over the years to salute the game and its champions.
The football-themed offerings include stamps that honor coach Vince Lombardi, the 1960s Green Bay Packers, the fourth Pittsburgh Steelers’ championship, the Four Horsemen of Notre Dame and Jim Thorpe, one of the game’s earliest heroes.
These stamps are no longer available from USPS, but they’re part of the organization’s long tradition of celebrating cultural icons.