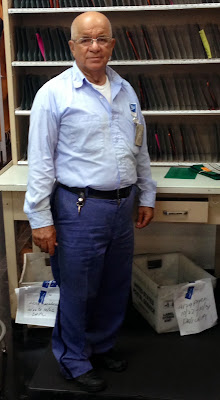 On Tuesday, October 22, Letter Carrier Jesus Malvarez was delivering his assigned route at 4033 Park Ave in Coconut Grove.  Olga, a customer he’s known for the 10 years on the same route, was screaming for help.  Her door was open.  Olga was lying on the floor, trembling with chest pains.  He immediately called 9-1-1.  He stayed with the customer, being coached by paramedics on the phone until Fire Rescue arrived and took the customer to the closest hospital on South Bayshore Drive.  He is credited with preventing his customer from having a fatal heart attack.
Postal Supervisor Marietta Capote says Carrier Malvarez is a conscientious and caring person who is concerned about his customers and his community.
"He deserves to be recognized on his good deeds above and beyond the call of duty," she said.
Capote has nominated her employee for PMG Hero recognition.