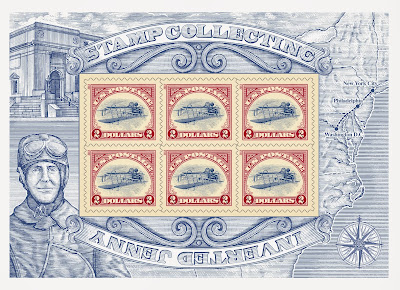 Two eerie occurrences took place surrounding the nation’s first airmail flight. The pilot got lost, flew in the wrong direction and crashed. And due to a printing error of the stamp created to commemorate this historic event, the biplane depicted on the 24-cent Curtiss Jenny airmail stamp was upside down. A sheet of 100 stamps bearing this error was sold to the public. One stamp sold at auction in 2007 for $977,500.

“The stamp is much more than a misprint,” said Postmaster General Patrick Donahoe in dedicating the stamp. “It also symbolizes the Postal Service’s pioneering role in American history. Air mail turned out to be one of our most successful innovations. By showing that air travel could be safe and useful, we helped create the entire American aviation industry, which went on to reshape the world.”

Pan Am, TWA, American, United, Northwest and other airlines originated as air mail contractors before passenger service began. Additionally to help commercial aviation get off the ground and to speed the mail, the Post Office Department helped develop navigational aids such as beacons and air-to-ground radio. Today the Postal Service continues as the commercial aviation industry’s largest freight customer. Mail also flies on FedEx and UPS cargo aircraft.

Visit this link at the National Postal Museum to see examples of Postal Service innovations.
Posted by Flipper at 12:06 PM