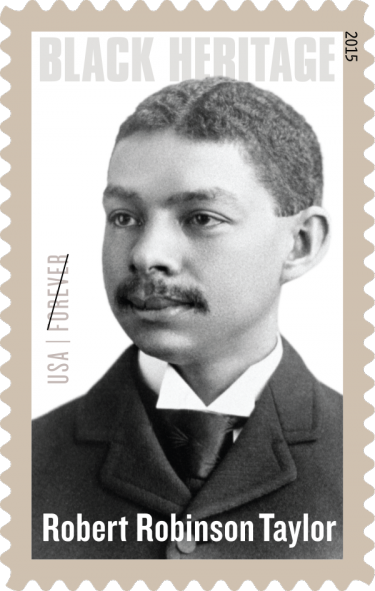 February is Black History Month, and this year's Black Heritage stamp will be available at Post Offices beginning February 12.

The 38th stamp in the Black Heritage series honors architect and educator Robert Robinson Taylor (1868–1942). This stamp features a photograph of Taylor taken circa 1890, when he was around 22 years old and a student at Massachusetts Institute of Technology (MIT).

For more than three decades, Taylor supervised the design and construction of the Tuskegee Institute in Alabama while also overseeing the school’s programs in industrial education and the building trades. He is believed to have been both the first black graduate of the MIT and the country’s first academically trained black architect. Through his calm leadership and quiet dignity, he earned the admiration of colleagues and students alike while expanding opportunities for African Americans in fields that had largely been closed to them.

In 1892, after graduating from MIT, this young man from Wilmington, North Carolina, accepted an offer from educator and activist Booker T. Washington to teach at the Tuskegee Institute in Alabama, where he soon set about shaping the appearance of the burgeoning school. Over the course of nearly 40 years, Taylor designed dozens of essential buildings, including libraries, dormitories, lecture halls, industrial workshops, and a handsome chapel, transforming a makeshift campus on an abandoned plantation into a confident, state-of-the-art institution.

Taylor’s work as a teacher and administrator was equally vital to the Tuskegee mission. While overseeing programs to train skilled artisans, he also established a curriculum with a certificate to help graduates enter collegiate architecture programs or earn entry-level positions at firms. His work furthered Booker T. Washington’s dream of fostering not just African-American builders and carpenters, but architects who could plan the buildings as well.
Posted by Flipper at 10:16 AM