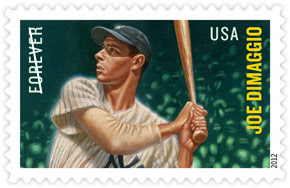 The Major League Baseball All-Star stamps will honor four players who were perennial All-Star selections and left an indelible impression on the game. The first of the four players to be revealed is Joe DiMaggio.

The son of an Italian fisherman, Joe DiMaggio (1914-1999) led the New York Yankees to ten pennants and nine World Series titles. Admired for his skill and grace as a fielder and base runner, the “Yankee Clipper” is best known for his incredible 56-game hitting streak in 1941. Many consider him the greatest all-around player of his time.

Artist/illustrator Kadir Nelson based his artwork on DiMaggio and the other three players on historic photographs. Art director Phil Jordan designed the stamps.

The Major League Baseball All-Star stamps are being issued as Forever® stamps. Forever stamps are always equal in value to the current First-Class Mail one-ounce rate.

The remaining three designs will be revealed at a later date.