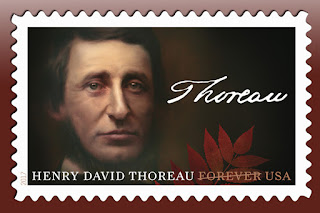 The Henry David Thoreau stamp will be released May 23

The U.S. Postal Service will release a stamp May 23 to honor Henry David Thoreau, hailed as the founding father of the environmental movement.

Thoreau (1817-1862) was a philosopher and naturalist who expressed criticisms of materialism and preached the virtues of living a simple life.

His pivotal work, “Walden,” written in 1854, chronicled his experience living in a one-room lake house outside of Concord, MA, where he farmed and spent his time observing the natural world around him.

Through his essays, books and journals, Thoreau pondered the problems that result from materialism and urged people to examine their misplaced priorities.

Thoreau’s works have continued to inspire and challenge readers to ponder society and the need for balance of materialism and spirituality.