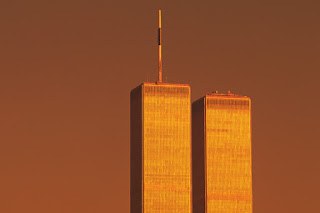 
8:46:40: Flight 11 crashes at roughly 490 mph (790 km/h) into the north side of the north tower of the World Trade Center, between floors 94 and 98. The aircraft enters the tower mostly intact. It plows to the building core, severing all three gypsum-encased stairwells, dragging combustibles with it. A massive shock wave travels down to the ground and up again.

The combustibles and the remnants of the aircraft are ignited by the burning fuel. Since the building lacks a traditional full cage frame and depends almost entirely on the strength of a narrow structural core running up the center, the fire at the center of the impact zone is in a position to compromise the integrity of all internal columns.

Two home video cameras are known to have recorded the impact. People below the severed stairwells in the north tower start to evacuate; no one above the impact zone is able to do so.


8:46 to 10:29: At least 100 people (some accounts say as many as 250), primarily in the north tower, trapped by fire and smoke in the upper floors, jump to their deaths. There is some evidence that large central portions of the floor near the impact zone in the north tower collapsed soon after the plane hit, perhaps convincing some people that total collapse was imminent. One person at street level, firefighter Daniel Thomas Suhr, is hit by a jumper and dies. No form of airborne evacuation is attempted as smoke is too dense for a successful landing on the roof of either tower.


9:03:13: Flight 175 crashes at about 590 mph (950 km/h) into the south side of the south tower, banked between floors 78 and 84. By this time, several media organizations are covering the first plane crash; millions see the impact live. Parts of the plane leave the building at its east and north sides, falling to the ground six blocks away. A massive evacuation begins in the south tower below its impact zone. One of the stairwells in the south tower remains unblocked, but filled with smoke. This led many people to mistakenly go upwards towards the roof for a rooftop rescue that never came. CNN's headline now reads 'Second plane crashes into World Trade Center'.


9:59 AM: The south tower of the World Trade Center collapses.


9:59:04: The south tower of the World Trade Center collapses, viewed and heard by a vast television and radio audience. It had stood for 56 minutes 10 seconds since the impact by Flight 175. As the roar of the collapse goes silent, tremendous gray-white clouds of pulverized concrete and gypsum rush through the streets. Most observers think a new explosion or impact has produced smoke and debris that now obscures the south tower. When the wind finally clears the immediate space, it is plain to see that there is no tower.


10:28:31: The north tower of the World Trade Center collapses from the top down, as if being peeled apart. Probably due to the destruction of the gypsum-encased stairwells on the impact floors (most skyscraper stairwells are encased in reinforced concrete), no one above the impact zone in the north tower survives. The Marriott Hotel, located at the base of the two towers, is also destroyed. The second collapse is also viewed live on television and heard on radio.