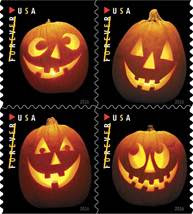 With customs and traditions that vary widely by community, Halloween now inspires parades and revelry, corn mazes and haunted houses, neighborhood and school parties, jack-o’-lantern and pumpkin festivals and even pumpkin-catapulting. No matter how or where people observe this ever-changing holiday in the early 21st century, Halloween remains a much-anticipated celebration.

Brought to North America by immigrants from Ireland and Scotland, Halloween soon became a distinctively American celebration that transcended social boundaries and ethnic origin. A 2014 survey showed that nearly 67 percent of the American population celebrates Halloween in some way — and jack-o’-lanterns are always there to lend a festive glow.


In Europe, these ghoulish lanterns were originally carved out of turnips — but in North America, native pumpkins proved to be a more fitting medium. Now emblematic sights at autumn festivals and Halloween events, they grin and stare from windows and porches, ingeniously combining the eerie feel of the season with the uncanny pleasure of laughing at the darkness.

Halloween fans are encouraged to share the news on social media using the hashtag #HalloweenStamps.
Posted by Flipper at 12:30 AM