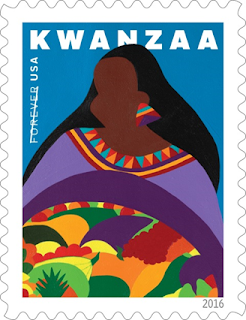 On October 1, the Postal Service dedicated the 2016 Kwanzaa stamp at a festival celebrating African-American and Caribbean arts in Charleston, SC.

This year marks the 50th anniversary of Kwanzaa, a non-religious holiday that is observed annually from December 26 - January 1.
“Kwanzaa celebrations focus on the importance of family, community and culture, and reflect some of the core values of African culture,” said Deputy Postmaster General Ronald Stroman, who dedicated the stamp.

The stamp depicts a young African-American woman holding a large purple bowl overflowing with fruits and vegetables, symbolizing the abundance of African harvest celebrations that inspired the creation of Kwanzaa.

Kwanzaa derives its name from the phrase “first fruits” in Swahili, a widely spoken African language.
Posted by Flipper at 12:30 AM