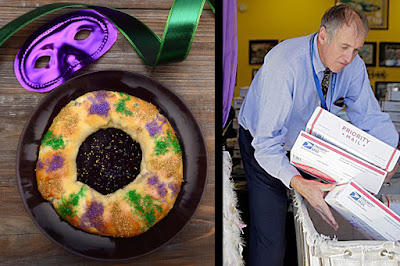 Slidell, LA, Postmaster Ray Phelan prepares a shipment of king cakes for Operation We Care. The cakes, which traditionally are decorated in purple and green, are a Mardi Gras staple. Phelan image: Nola.com

There’s something special about Mardi Gras — the parades, the beads and, of course, the king cakes.

As the annual celebration gets underway in New Orleans this week, USPS is helping a nonprofit group ensure military members serving overseas can also let the good times roll.

For 14 years, Louisiana District has worked with Operation We Care to package and ship hundreds of king cakes to troops to help them enjoy Mardi Gras, also known as Fat Tuesday.
“It gives me a sense of satisfaction when you know the Postal Service is loading up the packages filled with sweet king cakes,” said Operation We Care President Brenda Ogden.
Randazzo’s Camellia City Bakery and Slidell, LA, Post Office employees recently boxed more than 350 freshly baked king cakes decorated in red, white and blue.
The cakes were shipped in Priority Mail boxes and included a special note of gratitude.
“The king cakes will remind those soldiers that they may be out of sight, but they are far from forgotten,” said Slidell Postmaster Ray Phelan.
Source: LINK
Posted by Flipper at 12:30 AM