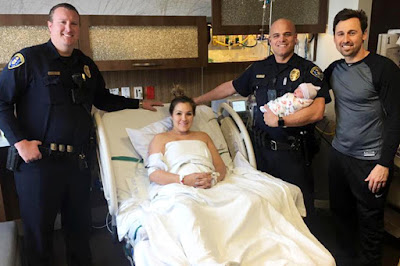 While some expectant couples choose a hospital to deliver their babies, one San Diego couple recently chose a Post Office parking lot.

After going into labor four weeks early, Vanessa Prado and her boyfriend, Dennis Dillard, were en route to a hospital last week when Prado began to feel her baby’s head crowning.

“I just said, ‘I’m not going to make it, and we’ve got to pull over now,” she told the local NBC station.

Realizing there was no slowing down the early morning arrival, the couple had a choice to make — pull into a McDonald’s or the Mira Mesa Post Office, which hadn’t opened yet.

The couple chose the Post Office for their special delivery.

The couple named their baby Pierce Dillard, but at least one other option was considered.

“We joked that we were going to name him Pierce Postal,” Prado said.