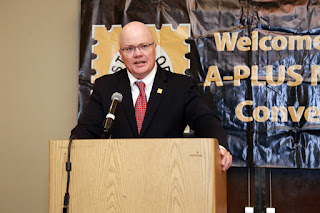 “We are proud to represent a diverse employee population,” Williams said during his keynote address at the national convention for African-American Postal Leaders United for Success (A-PLUS) in Philadelphia.

“We endeavor to embrace an inclusive environment that recognizes and values the richness of people’s viewpoints, experiences, cultures and backgrounds.”

Williams discussed the Postal Service’s efforts, which include:
A-PLUS also marked its 30th anniversary at the convention. The organization was founded in 1987 by 14 individuals, and eight of the nine who are alive participated in the convention.