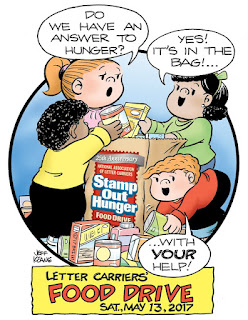 
“Too many people in this country are going hungry,” NALC President Fredric Rolando said. “We know this to be true because we see it as we deliver to every address in America at least six days a week.”


Nearly 49 million Americans — 1 in 6 — are unsure of the source of their next meal. This includes 13 million children, as well as about 5 million seniors over age 60 — many of whom live on fixed incomes and often are too embarrassed to ask for help.


Last year, the food drive collected a record 80 million pounds of nonperishable food, raising the total amount of donations picked up over the quarter-century history of the drive to more than 1.5 billion pounds.


“Our extraordinary history of filling local food pantry shelves in communities across the country is made possible by our partnerships with these national organizations, in conjunction with the dedication and hard work of letter carriers,” President Rolando said. “The food drive is just one of the many ways letter carriers give back to our communities, and it’s almost time for us to shine once again.”