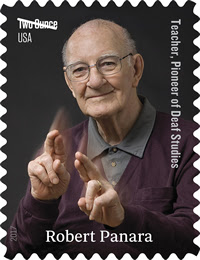 Today, the Postal Service will release a stamp to honor Robert Panara, an influential teacher, poet and pioneer in the field of deaf studies.

Panara (1920-2014) was profoundly deafened at age 10 after contracting spinal meningitis that damaged his auditory nerves. He went on to a 40-year teaching career, using American Sign Language to convey Shakespeare and other works of literature.

In 1967, Panara helped found the National Technical Institute for the Deaf at the Rochester Institute of Technology in New York. He became its first deaf faculty member and taught English to both deaf and hearing students until 1987.

Panara was also one of the founders of the National Theatre of the Deaf in Waterford, CT, which has provided deaf actors with a performing arts venue since 1967.

His poems include the intensely personal “On His Deafness.”

Additionally, Panara co-wrote the book “Great Deaf Americans” with his son,
John, and he served as an editor of “The Silent Muse: An Anthology of Prose and Poetry by the Deaf.”

The two-ounce stamp, which is the 16th entry in the Distinguished Americans series, will be available at Post Offices and usps.com.