For the second time in a few short months, the South Florida District has been selected to host a national First-Day-Of-Issue (FDOI) stamp dedication ceremony. In November, it was the Hanukkah stamp at Temple Beth El of  Boca Raton, and in February, Fort Lauderdale will host the Patriotic nonprofit stamp dedication ceremony at the city's War Memorial Auditorium.


The non-denominated Patriotic Nonprofit stamp will be dedicated during the American Stamp Dealers Association (ASDA) Winter Postage Stamp Show at the Fort Lauderdale War Memorial Auditorium at 800 NE 8 Street. Plans for the three-day event (February 10-12) are being finalized. The date and time of the dedication ceremony will be announced in the blog and in a Newsbreak. 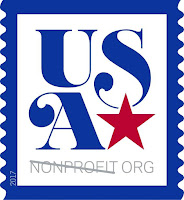 The Patriotic Nonprofit stamp features the letters “USA” in blue, accompanied by a bright red star on a white background with a blue border. To create the new design, the 2016 USA stamp art was rendered slightly smaller to accommodate the blue border. Intended for bulk mailings by authorized nonprofit organizations, this stamp will be issued in coils of 10,000.

In 1950, the Fort Lauderdale War Memorial Auditorium opened its doors as a multi-purpose facility owned and operated by the city. Shortly after the auditorium opened, the city decided that it would be a living memorial to the veterans and fallen of World War II. The names of hard-fought WWII battles radiate from the seal on the lobby floor. The Korean and Vietnam Wars are also remembered, and in the mid 1970’s, the Gold Star Mothers donated a statue of a Vietnam solider which was placed in the lobby. In November 2009, the City honored our men and women who served in the armed forces with the rededication of the Korean War-era F-86 Sabre Jet.
Posted by Flipper at 12:30 AM