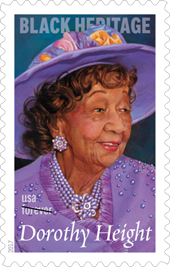 The 40th stamp in the Black Heritage series honors Dorothy Height (1912–2010), the tireless activist who dedicated her life to fighting for racial and gender equality.


President John F. Kennedy named her to his Commission on the Status of Women. She attended the 1963 White House ceremony at which he signed the Equal Pay Act. In 1971, Height helped form the National Women’s Political Caucus.

In 1977, Height officially retired from the Young Women’s Christian Association (YWCA), for which she worked for 40 years. In 1994, President Bill Clinton awarded her the Presidential Medal of Freedom. A decade later, President George W. Bush presented her with the Congressional Gold Medal.