Key West employees have hearts of gold. Just ask a family who lives on the route delivered by Letter Carrier Patty Boney.


On Christmas Eve, Santa had made his list and checked it twice, but he should have checked it a third time before leaving the North Pole to deliver gifts to good boys and girls around the world.


Santa arrived in Key West, but when he unpacked his sled, there were no gifts for this family, and that morning, the children, ages 6, 8 and 16, were heartbroken. 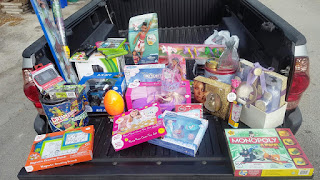 Boney got in touch with Santa who was distraught over the situation. She told him not to worry, and that she and her co-workers would protect his brand and purchase and deliver some gifts (pictured right) on his behalf.


And that’s just what the Letter Carriers did. And Boney told the children that Santa had stopped at the Post Office to ask for their help.


“The generosity of Patty and her co-workers gave these kids a Christmas to remember,” said Key West Postmaster Larry Cowan. “And Santa remains on their good list.”
Posted by Flipper at 12:30 AM