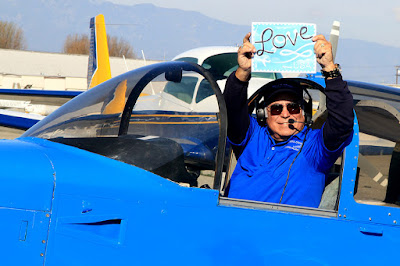 
The pilot who dazzled attendees at the Postal Service’s recent Love Skywriting stamp dedication has been filling the skies with words for more than a half-century.

Greg Stinis flew a Grumman Tiger (AA5-B) at the January 7 ceremony and wrote the word “Love” in the sky above Chino, CA, replicating the image on the stamp.

He’s proud to preserve a lost art form.
“I think it’s safe to say more people have walked on the moon than are professional skywriters today,” Stinis said.


Skywriting had its heyday as an advertising medium from the 1920s-50s. A message is created by a small airplane that emits vaporized fluid from its exhaust system to form letters in the air.

Stinis, chief executive officer and squadron commander of the skywriting firm Skytypers, began his career more than 50 years ago while working for his father Andy Stinis, the company’s founder.

Aviation is a family tradition: Stinis said his father was friends with Charles Lindbergh and helped him push the Spirit of St. Louis onto the runway for his historic 1927 New York-to-Paris solo flight.

Stinis has created more than 2,000 skywritings during his career. He said his work at the stamp dedication was “one of the most challenging” assignments yet.

To replicate the stamp image, the “L” in “Love” was about 6,000 feet tall — more than four times the height of the Empire State Building. The remaining letters were about 2,000 feet tall.

“I usually create block letters, so the timing and visual queues and maneuvers are new,” Stinis said. “Time is against me. Once I start I can’t stop writing or the whole message will blow away.”
SOURCE: LINK
Posted by Flipper at 12:30 AM