Love (Skywriting) is in the Air Today 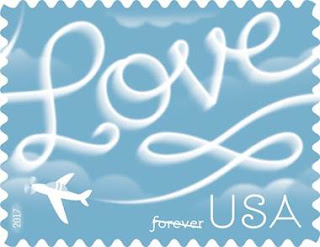 
The event will stream live on the Postal Service’s Facebook page. Customers are asked to spread the news using the hashtag #LoveStamp.


“The Postal Service issued its first Love stamp in 1973, and over the years, these stamps have dressed up billions of birthday greetings, wedding invitations, birth announcements, and, of course, Valentine’s Day cards and letters,” said U.S. Postal Service Chief Operating Officer and Executive Vice President David Williams. “From the moment they’re spotted on an envelope, these miniature works of art foretell good news. And with this particular stamp, we can really say, once and for all, that ‘love is in the air’ — and in the mail.”


This new stamp is a cheerful and romantic continuation of the U.S. Postal Service’s Love stamp series. The Love Skywriting stamp will add a romantic touch to letters and cards, not only on Valentine’s Day, but all year round.


The stamp art depicts the word “Love” written in white cursive script against a blue sky with wispy clouds and the edges of the letters just beginning to blur. Underlining the word is a decorative swirl of smoke that emphasizes the message. A small, stylized plane, dwarfed by the giant letters, completes the end of the swirl, with smoke trailing from its tail.


The Lost Art of Skywriting


Skywriting had its heyday as an advertising medium from the 1920s to the 1950s. A message is created by a small airplane that emits vaporized fluid from its exhaust system to form letters in the air. Still used occasionally for advertising slogans, skywriting today commonly broadcasts romantic — and very public — declarations of love.
Posted by Flipper at 12:30 AM