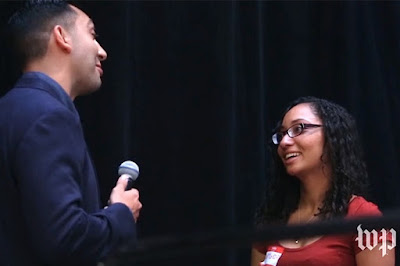 Forget “Wish you were here.”


A recent National Postal Museum event about postcards ended with one attendee proposing marriage to his girlfriend.


The Washington, DC, museum held the gathering to celebrate a new exhibition about PostSecret, a public art project in which people write a secret on a postcard and mail it to creator Frank Warren.


During the event, Warren read some of his favorite submissions. The last postcard was a plant from Stephen Evans, a government contractor who was in the audience with his girlfriend, Ashley Ortiz.


“I secretly love all the things my girlfriend thinks I can’t stand about her,” Warren read. “Like her curly hair, her accent when she sings country songs, her deep love of ketchup, her nicknames for me.”


A Washington Post video shows a stunned Ortiz becoming tearful when she realizes Warren is reading a message from Evans.


The video also shows Evans bringing Ortiz to the stage, where he pops the question. With the audience cheering, Ortiz kisses him through her tears.


“There’s never been a better ending to a PostSecret event in 12 years,” Warren told the Post.
Source: LINK
Posted by Flipper at 12:30 AM