This Day in History: Service on Ice in Antarctica 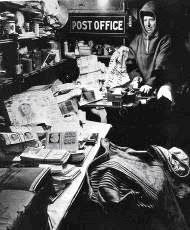 There was once an official Post Office in Antarctica. Established on Oct. 6, 1933, the Post Office went with Admiral Richard E. Byrd and his crew when they left Norfolk, VA, for the Little America base camp, located on the Ross Ice Shelf, Antarctica.
The expedition was Byrd’s second of five to the Antarctic and the only one to have a Post Office. The office itself was part of a philatelic project supported by President Franklin D. Roosevelt, an avid stamp collector. In a conversation between Byrd and Roosevelt, the president mentioned that it would be nice if stamp collectors around the world could have a commemorative cancellation from the Little America camp during Byrd’s upcoming expedition — and a special postage stamp for use only on Little America mail.
Roosevelt himself suggested the stamp design — a striking vertical, navy blue and white stamp that featured a large globe showing several Byrd flights, including those proposed for this expedition.
The 3-cent Byrd Antarctic Expedition II commemorative stamp was issued Oct. 9, 1933, intended solely for philatelic use on mail sent to Little America. To offset the cost of transportation, which could only be provided by the expedition, a 50-cent surcharge was added to the stamp price. The cost did not discourage sales, however, as an estimated 240,000 letters went through the Little America Post Office.
Much of the mail set sail with the expedition in October 1933. Another large batch went by regular steamer to Dunedin, New Zealand, where it caught up with the expedition before it left for Little America.
Mail continued to be forwarded to Dunedin until Nov. 1, 1934, the latest date it could reach the relief ship before its departure for Little America.
Dr. John Oliver LaGorce, vice president of the National Geographic Society, was appointed honorary Postmaster of the Little America Post Office. Assistant Postmaster Leroy Clarke, a member of the Byrd expedition, was in charge of actual postal operations. As it turned out, the job proved to be too much for Clarke and the expedition had to turn to the Post Office Department for help.
The Post Office Department sent Charles Anderson, a 43-year postal veteran and “traveling mechanician” who specialized in canceling first-day covers. Anderson set off on Nov. 7, 1934, and arrived at Little America the following January, along with an additional 40,000 letters, canceling machines, assorted postmarking stamps, inks, glues and a large supply of indelible pencils, in case the inks froze. Then, in one continuous stretch from Jan. 19 through Feb. 4, 1935, Anderson canceled most of the covers that had arrived with Clarke a year earlier and all those he had brought. Anderson and the mail returned with the expedition in March 1935.
The Post Office was officially discontinued on May 31, 1935.
For more Antarctic postal history, visit the Antarctic Philatelic home page at south-pole.com.
Source: liteblue.usps.gov "Behind the Blue"
Posted by Flipper at 4:17 PM